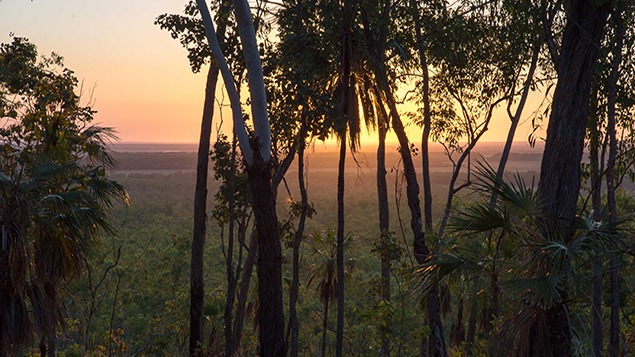 After the Climarte event in Melbourne, I fly to Darwin with Australian artist Mandy Martin, conservationist Guy Fitzhardinge, architect and artist David Leece, and a host of related folk who have taken on a new “art, science and story” endeavor. The Paruku Project, which Guy, Mandy, and David ran a couple of years ago, addressed the ecological and economic fragilities around Lake Gregory in Western Australia. That work produced a fine archive and exhibition at the Nevada Museum of Art, and now we’re off to work on a similar project in Arnhem Land in Australia’s Northern Territory.

Much of the Northern Territory is a tropical savanna very unlike the red deserts of Western Australia. This is where homo sapiens first entered Australia, and the region therefore has very old evidence of Aboriginal culture. Arnhem Land, located in the northeastern corner of the Northern Territory, is known for its avid preservation of that culture. Except for Kakadu National Park, it’s a region few outsiders are able to visit. This new project seeks to “raise awareness, both nationally and internationally, of the work that the Indigenous communities living in the Djelk and Warddeken Indigenous Protected Areas undertake to preserve their unique cultural and ecological environments.”

We spend the night in steamy Darwin, then hop in a chartered twin-engine plane for the 323-mile flight east to Maningrida, a coastal town of around 2000 inhabitants and one of the most important art centers in Australia. When we land we learn that the big story in town is an attempt to capture an eighteen-foot-long saltwater crocodile that’s been snacking on dogs and feral pigs foolish enough to wander the beach.

It’s Mandy contention that, while the people of Arnhem Land are world renowned for their bark paintings and other objects telling traditional stories, there are also new stories needed to deal with climate change and other evolving challenges—and maybe new art techniques are needed to portray those narratives. She’s talked with the local people and determined that they’d like to try out a new palette that includes everything from day-glo paints to three-dimensional video techniques. 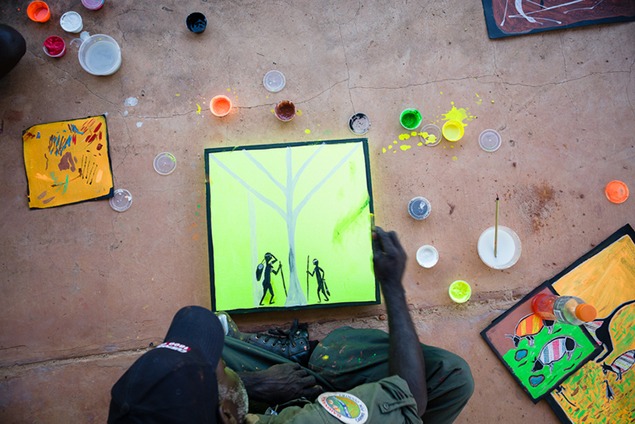 While I’m writing for the project, I’m also here to spend time with curator Henry Skerritt—with whom I’ve worked recently on our recent No Boundaries exhibition of Aboriginal art. We plan on interviewing some of the better known masters of bark painting, as well as some of the artists with whom Mandy is working.

While Mandy and her husband, the rancher and conservationist Guy Fitzhardinge, meet with the local rangers to sort out logistics, Henry and I head over to the Maningrida Art Centre to meet with Coordinator Louise McBride, and to arrange the interviews, including a conversation with John Mawurndjul, whose work I’d seen at TarraWarra a few days previously. The Centre is packed with some of the finest bark paintings and ceremonial burial poles I’ve ever seen, as well as textiles, baskets, and other objects. At the end of the day we regroup to drive out to the Djinkarr Lodge, an eco-tourism facility set up eleven miles out of town, and where we’re staying for the week. The cabins, which are mostly unused at the moment, sit on a bluff overlooking a river valley, which offers up one of the best sunsets we’ve had in our travels. When dark falls, the invasive and poisonous giant cane toads flop around the paths, while over my bed green geckos chase down an astonishing variety of insect life. 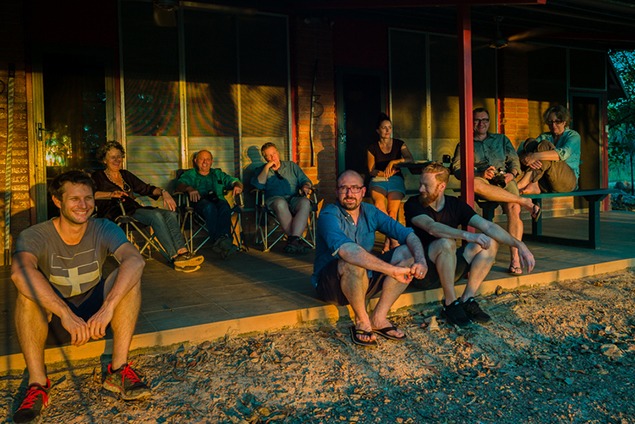 As the week progresses, it becomes evident that Mandy’s strategy of bringing new tools to new stories is a good one. A prime piece of evidence is Ivan Namarnyilk’s fluorescent feral pig rubbing up against rock art, which is painted as white figures on an ochre ground. The neon colors of the invasive species threatens to erase history. This melding of old and new palettes, of traditional images with that of a new environmental and cultural challenge is exactly what Mandy is seeking. 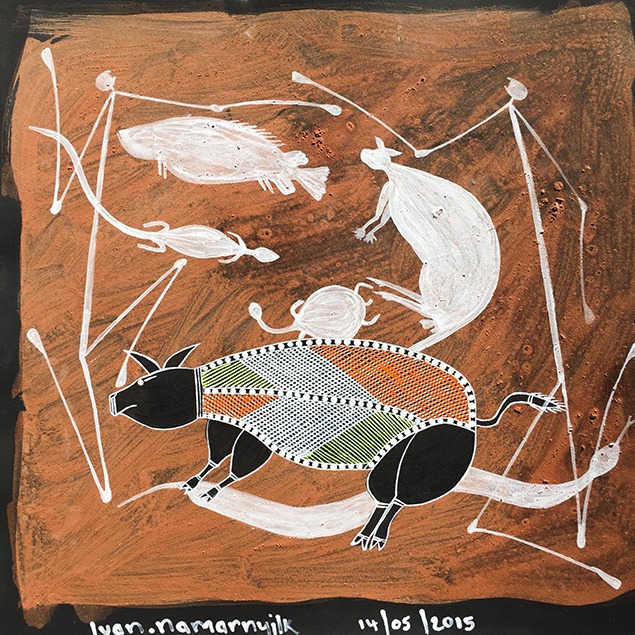