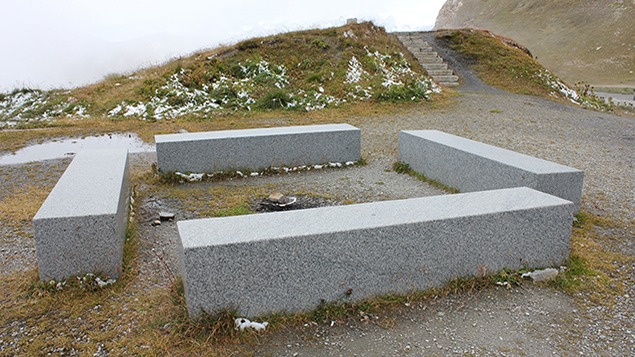 Dispatches from the Alps, 4

Settling down with Janis Osolin for a lunch of homemade tomato soup, deer salami, bread and local cheeses, I scribble as fast as I can as he relates the history of Furk’Art . Janis is committed to people understanding the pass as more than a scenic climax, but as a site socially constructed through the conjoined histories of tourism, transportation, industrial and military usage, and also as a place where the African and European tectonic plates meet. The Alps, which each year rise anywhere from one millimeter to one centimeter a year—and are eroded almost as quickly!—are static neither geologically nor culturally.

When Hostettler, who owned a gallery in Neuchatel, brought the American performance and installation artist James Lee Byars to Furka Pass in 1983, they initiated a conversation that continued with subsequent guest artists about how to run a unique residency program in such a remote area. One of the tenets was that artists would agree to leave behind whatever they created at Furka. The result is that the work produced over the twenty years while Hostettler ran the program has formed a richly textured place-specific collection that remains mostly unknown to the art world in general, even in Switzerland. The artists would have about two months of working time during the summer, and had to plan carefully beforehand, in particular for the taxing weather that could take apart works of art situated outside. “If you had the wrong screw, it took you three hours to go down to a store and come back.” 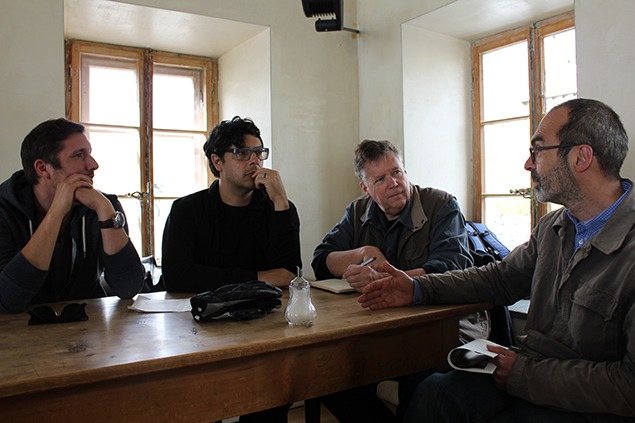 From left to right, Benîot Antille, Julian Myers-Szupinska, myself, and Janis Osolin talking in the Furka Hotel café. Photo by Sara Frantz.

In his status as the caretaker of the Furk’Art program, Janis has responsibility for conservation conundrums. For example, the repainting the Buren shutters after they’ve almost weathered away requires choices about paint types, the chemical composition of which have evolved since the works were first created. An extreme example is the set seven boulders painted with white chalk, a work that disappeared with the first snowfall. Should they be re-created?

After lunch Janis takes us on a tour of the hotel itself, which is preserved in a way to present the history of the site, the hotel, and the art. A hat contributed by Joseph Beuys sits in a stairwell vitrine with the twisted stub of a small military rocket resting on top. A pattern painting of pink and white crosses by Olivier Mosset is installed in a room as a visual layer atop the original floral wallpaper. One room contains a sample of every curtain ever hung in the building, as well as sample rugs. No photographs are allowed: Janis wants Furka “to be a place of discovery.”

It’s clear that Janis is not in a hurry to complete his curation of the hotel contents and environs. He wants Furka to offer a “forgotten, relaxed atmosphere” in distinction from “efficient Switzerland.” To that end, and as Benoît puts it, he has stripped away as much typography from the buildings as possible in order to retain signification without signature. That, plus the ban of cameras from the premises, is akin to how land artists such as Walker De Maria and Michael Heizer demand that you experience their works in person and not through a representation. 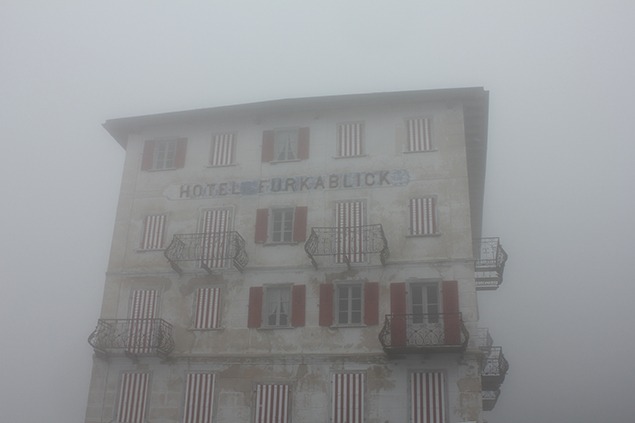 Fog closing in on the Furka Blick Hotel after lunch. The Furka Pass sits high in one of the snowiest regions of the Alps, and the pass will close in a few weeks. Photo by Sara Frantz.