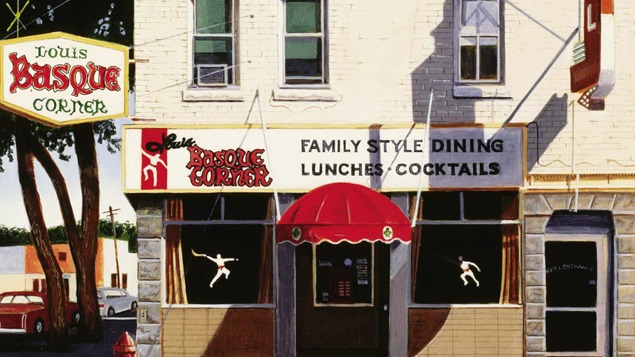 A Fragile Presence:
The Local Landmark Paintings of Roy Powers

In a growing region like northern Nevada, familiar landscapes seem to disappear from the landscape with the blink of an eye. Longtime Reno resident Roy Powers has spent the better part of the last quarter-century documenting historically significant structures—some of which no longer exist. Powers’ oil paintings nostalgically recall a bygone era and remind us that there are, in fact, many noteworthy structures whose existence continues to hang in fragile balance. Images of local landmarks include Louis’ Basque Corner, the Coney Island Bar and the Santa Fe Hotel.

Roy Powers moved to Reno in 1946, but it was not until 1975 that he began painting venerated architectural structures throughout Northern Nevada—the subjects that remain his predominant artistic focus to this day. With camera in hand, he sets out to find and document storied locations, simultaneously trying to capture the visual character of the structures and to convey a sense of the places’ notable history. The photographs taken on these excursions become the source material for

Powers’ realistic yet reverent landmark paintings—a body of work recognized as a significant historical statement by the Nevada Historical Society in 2001. A Fragile Presence will feature works spanning several decades—a confirmation that the northern Nevada landscape continues to change, and that amidst this transition, Roy Powers immortalizes the places that so often get swept away in the name of progress.