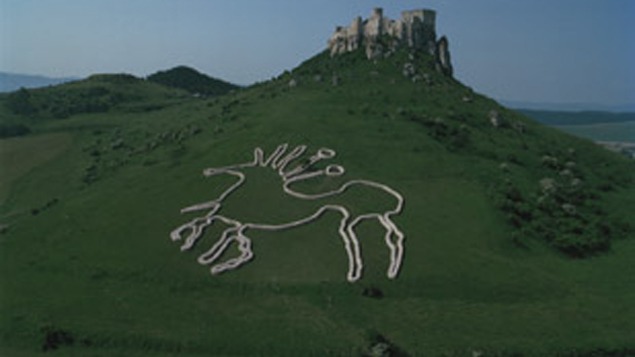 Australian sculptor and photographer Andrew Rogers began making large-scale geoglyphs in 1999 to create meditative spaces on each continent of the globe. Geoglyphs are large-scale designs made on the ground by either removing materials such as surface soils, gravel, and small rocks, or by rearranging preexisting stones and natural materials. Ancient geoglyphs are found throughout the desert regions of the world, as well as the Amazon Basin, Europe, and the American West. Rogers completed his series of contemporary geoglyphs in 2010, after finishing forty-seven sculptures in thirteen countries with the help of nearly 7,000 people.

At each of his sites, Rogers incorporates at least two motifs. One of them is typically the Rhythm of Life figure—a personal symbol for Rogers that represents change and is based on his early abstract sculptures. Since construction of the geoglyphs often requires the help of hundreds of residents, the second motif is chosen by the local people with whom Rogers works. Local motifs range from totemic animals, sacred symbols, and historical emblems.

The use of two motifs at each site—one chosen by Rogers and one chosen by local residents—makes these geoglyphs both site-specific, global, and a unique contribution to the history of Land Art. The photographs in this exhibition were either made by Rogers from an aircraft or obtained from commercial satellite imagery.

The photographs in this exhibition are from the Center for Art + Environment Archive Collections.