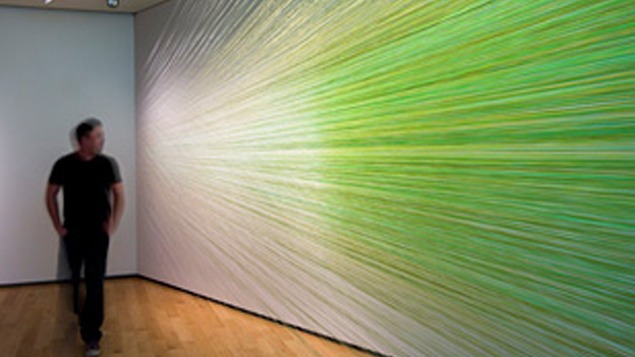 Anne Lindberg creates subtle drawings and installations that blur the line between traditional media. Made from colored thread and graphite, her meditative works are studies in formal abstraction, complicating viewers’ perceptions of relationships to the objects themselves.

Lindberg’s graphite drawings made from thousands of parallel lines appear to vibrate on paper. Systemic and non-representational, they are subtle, rhythmic, abstract, and immersive. Her more recent room-sized thread installations consist of thousands of strands of fine threads in different hues suspended carefully from the wall. Viewers peer through the layers to experience a shifting color palette altered by subtle lighting and shadow. In these installations, Lindberg explains that she “discovered an optical and spatial phenomenon that spans the outer reaches of our peripheral vision. The work also references physiological systems—such as heartbeat, respiration, neural paths, equilibrium—and psychological states.”

Lindberg resides in Kansas City and holds a M.A. from Cranbrook Academy of Art and a BFA from Miami University. She was Visiting Artist-in-Residence/Head of Department at Cranbrook Academy of Art in 2005 and taught for nine years at the Kansas City Art Institute. Her work has been shown at the Kemper Museum of Contemporary Art, The Drawing Center in New York, the Daum Museum of Contemporary Art and the Sheldon Memorial Art Museum.