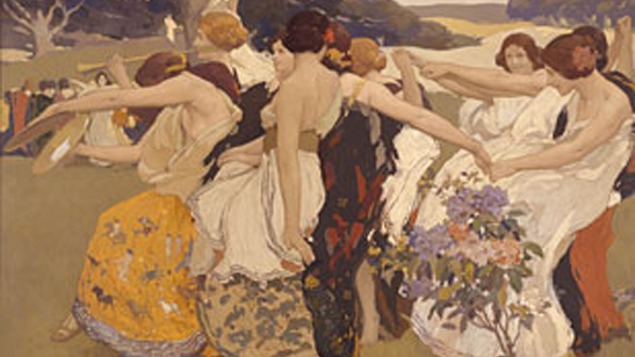 Arthur and Lucia Mathews:
Highlights of the California Decorative Style

Arthur and Lucia Mathews are widely acknowledged as two of California’s most prolific artists working in what is widely known as the California Decorative Style during the early twentieth century. The aesthetic they fostered incorporated classical references, idyllic landscapes and a muted tonal color palette applied to a variety of works from murals and paintings to wooden frames and decorative objects. Their careers unfolded during the height of the American Arts & Crafts movement, when an emphasis on fine design and craftsmanship was placed on the hand-made production of material goods and objects.

As residents of San Francisco, their philosophical emphasis on the importance of aesthetics and design contributed to the revitalization of the city following the 1906 earthquake. In many of their paintings, California is represented as a new Arcadia, with mythological figures wearing fanciful Greek robes dancing or frolicking in idyllic settings. They often incorporated stylized motifs based on swans, peacocks, zodiacal figures, and botanicals into their work, and their landscape paintings of cypress trees on the Monterey Peninsula—where they spent many summers—have become icons of that region.

All of the artworks in this exhibition are from the collection of the Oakland Museum of California.