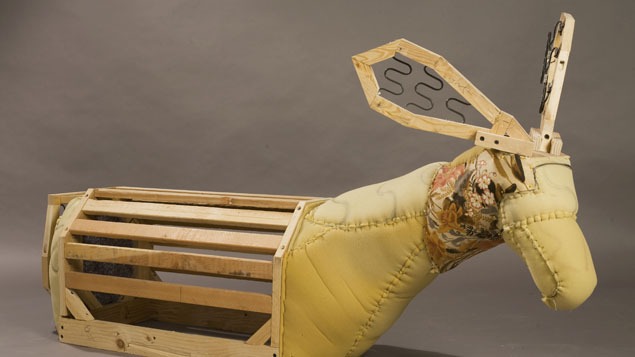 Bryan Christiansen makes life-sized contemporary sculptures that challenge conventional notions about rural life, home, the rituals of the hunting tradition, and the innocence of childhood. Using discarded household furniture that he finds in neglected urban areas, Christiansen crafts assemblages that stand in for the trophies, antler mounts, and pelts so often prized by hunters.

Raised in a small log cabin in the Black Hills of South Dakota, Christiansen experienced all the requisite activities of a rural childhood: absorbing nature, communing with wildlife, and learning to hunt. But at the same time, he also grappled with the complicated and tumultuous happenings of his family’s domestic life. When Christiansen arrived as a student at the University of Nevada, Reno, he turned to art as a way of wrestling with the conflicting realities of his past.

When making his sculptures today, Christiansen ventures into forgotten city alleyways and parking lots to search for discarded furniture— as if to mock the ritualized pursuit of stalking and hunting animals. After he returns to the studio, he proceeds to “skin and gut” the furnishings, as though he were eviscerating a fresh kill. In acknowledgment of Native American traditions, however, he makes sure that nothing goes to waste, saving and bottling everything down to the last bit of sawdust and string.

Christiansen’s sculptures recall the work of 1950s assemblage artists Bruce Conner and Ed Kienholz, who used gritty discarded objects to probe such issues as the passage of time, death, and decay. Unlike the work of these artists, however, Christiansen’s reconstructions are exquisitely crafted, featuring exposed hand-stitchery and floral fabrics that have more to do with making sense of life than they do with dwelling on death. As trophies, they represent Christiansen’s own triumph of the present over the past and his strength to confront some of life’s most challenging contradictions.