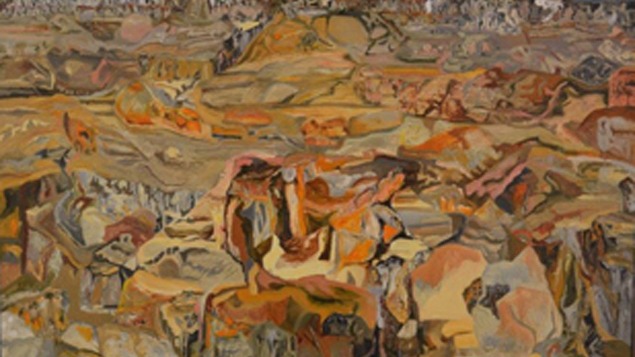 Carmelo Ortiz de Elgea is one of the most well-known painters living and working today in the Basque Country, located on the border of northern Spain and southern France. Ortiz de Elgea rose to prominence in the Basque art world of the 1970s, following the emergence of the Modern art movement, which became a galvanizing force among artists in Spain seeking a progressive alternative to the oppressive regime of General Francisco Franco.

Ortiz de Elgea was a founder of a group of artists known as Orain in the Basque province of Álava. Orain was established with a commitment to supporting aesthetic experimentation as a tool for social change during a period of extreme historical and political upheaval. Ortiz de Elgea’s work from this time combined figurative and abstract qualities; a unique blending that would continue to manifest itself throughout his career.

This exhibition includes paintings from Ortiz de Elgea’s travels to the American West in 2011, specifically northern Nevada and California. The artist was invited to the region by Bill Douglass, a scholar of Basque culture and founder of the Center for Basque Studies at the University of Nevada, Reno. After visiting places like Lake Tahoe, Mount Rose, Virginia City, and Smoke Creek, he then explored the surrounding areas of California, Colorado, Oregon, New Mexico, and Utah. “I couldn’t imagine the impression such a big open space and the expanse of landscapes of virgin nature would have on me,” Ortiz de Elgea said of his travels. “I immersed myself into the magnificent landscape, revisiting it with my canvas and colors, and painting it without a moment of rest. I would have loved to live there and never leave the immense land where eyes get to see all the way to the horizon without interruption.”

While Ortiz de Elgea’s work has been shown widely in the Basque Country, this is his first exhibition in the United States.

Center for Basque Studies at the University of Nevada, Reno and the Nevada Arts Council, a state agency, and the National Endowment for the Arts, a federal agency