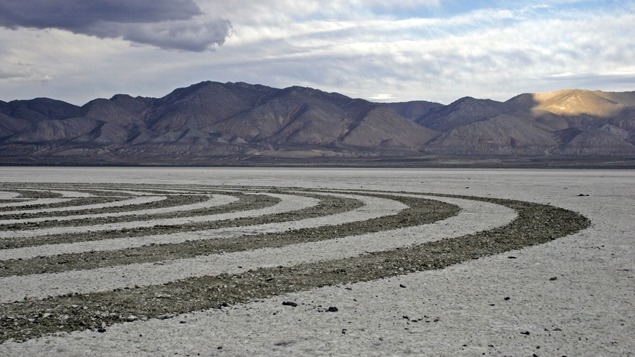 One of Great Britain’s most prolific and respected Conceptual artists, Chris Drury investigates themes related to the environment, emphasizing cycles of destruction and regeneration in nature, and the ways that humans affect these processes. In Mushrooms |Clouds, Drury brings an international perspective to topics ranging from land and water appropriation to nuclear testing in the American West. In many of his artworks Drury utilizes materials collected from such places as Pyramid Lake, Donner State Park, and the Nevada Test Site to engage NMA guests in the ongoing debates related to scientific, cultural, environmental, and political issues.

Mushrooms | Clouds will be Chris Drury’s first major museum exhibition in the United States. Including paintings, prints, and sculpture drawn from two of Drury’s most notable ongoing series: Mushrooms and Clouds, the exhibition will also include new works produced in partnership with the For-Site Foundation in Nevada City, CA and the Desert Research Institute in Reno, NV.

As primary regenerators of soil and poisonous agents of death, mushrooms represent a cycle of destruction and regeneration in the environment. From mushroom spore prints and large-scale sculpture to multiple video works that explore cloud-like properties of smoke and water, Drury makes visible the subtle connections between art and environment.

Drury’s works have often taken the form of shelters, cairns, baskets, and bundles made from natural objects such as rocks and wood. His thoughtful examination of materials—including mushrooms, plants, trees, and water—have led Drury to discerning observations about the complex patterns of flow and movement within nature. According to British art critic Kay Syrad, “Drury’s art is a story of rhythms, tensions and conflicts, labor, ritual and human intelligence. Each piece of work is a complete narrative, opening out gradually and reaching (temporary) resolution. Every decision about which material to use, which shape to create, where to place a work, whether or how to photograph or record it, and how to think about the contradictions between the work and its reproduction is a dramatic act that defines, dissolves and renews perceptions about the relationship between nature and culture.”