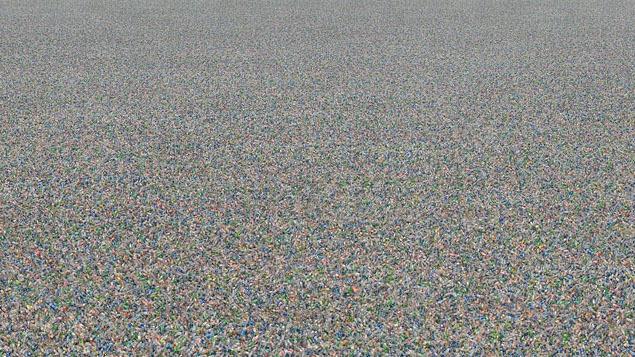 Photographer Chris Jordan takes statistics that are too big for the mind to grasp and makes them shockingly beautiful for the eye to behold: 2 million plastic bottles used every five minutes, 426,000 cell phones retired every day, 2.3 million prison uniforms representing the number of Americans incarcerated annually. By fusing image and information into epic photographs, he asks us to consider our role as global citizens and our impacts on the planet.

In 2006, Seattle-based Jordan began a series of digital photographs that present American culture via the nearly incomprehensible statistics of American excess. Jordan does his own research, often using government databases or websites that include statistical data. He is meticulous about keeping his records on hand in case his data is ever questioned. The exhibition focuses on Jordan’s recent body of work, Running the Numbers and also includes selections from his previous series Intolerable Beauty. It is the first comprehensive presentation of this internationally-known artist’s work