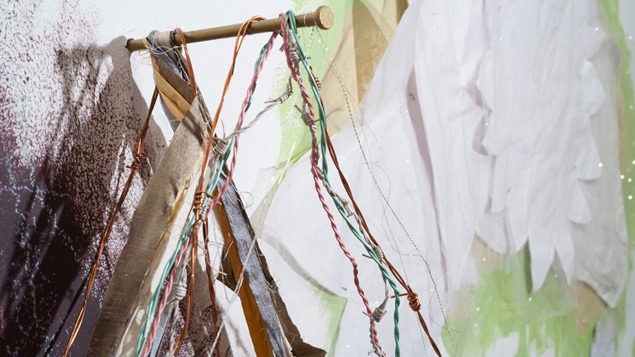 Mothers–The Art of Seeing  is inspired by land, politics and the spirit in equal measures. Well known for experimenting and pushing the technical aspects of her work with new materials such as plastic, barbed wire, and fine stainless steel wire, Underwood has created three separate series of artworks for this exhibition – each stylistically distinct, all representing interconnectivity both literal and metaphoric.

A site-specific installation inspired by the geologic formations of the nearby Black Rock Desert includes a painted form with a jagged line dividing it into two, alluding to the fence under construction which separates the United States and Mexico. Nails and fibers are integrated into the surface, along with paw prints representing the presence of migratory animals. Jimenez Underwood thereby expresses her concern about the environmental impact of the Mexico-United States Barrier. “The border is one land, always has been and always will,” Underwood says. “The plants, animals and flowers know this.”

A second series of works consists of a series of five rebozos – the long flat garment worn by women, mostly in Mexico. These weavings are notably more refined and elegant than the border piece. In fact, Underwood intends these works to serve as gifts for her maternal ancestors. “Beauty, grace, and flowers soothe the quiet rage that has permeated the Americas for more than five hundred years. Thus, when I weave, sew, or embellish, the viejitas (the old ones) seem to express their encouragement and support of my creations.”

The final series consists of two separate artworks, including a flag-like tapestry that interweaves the United States flag with the flag of Mexico. The artist states, “My audience is the general public: all who live on the American continent, all who have seen and experienced the majestic power and grandeur of the American western landscape, all who care about the environment, and most importantly, it is for those who would want their descendants to be able to enjoy these visual and necessary gifts from Mother Earth.”

Crossing borders and negotiating between three perspectives – American, Mexican, and Indian – has always been a fundamental aspect of Underwood’s persona, and the basis of her creative process. She first learned how to weave from her Mexican mother, eventually refining her knowledge through formal education. She earned a Bachelor’s and two Master’s degrees in Fine Art, eventually shifting her initial interest from painting to fiber arts.

For more than twenty years, Underwood was Professor of Art and Head of the Fiber/Textile Area in the School of Art and Design at San Jose State University in California.