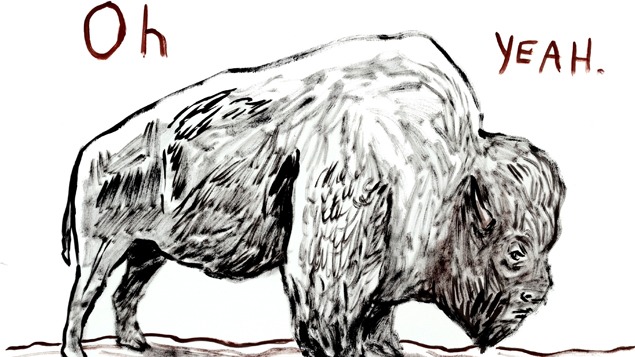 Dave Eggers’ new drawings and paintings, created especially for this exhibition, feature strange, powerful images of animals, and plaintive text—much from the Old Testament. The resulting effect is oddly spiritual, often profound and sometimes even humorous.

Eggers is widely known as a San Francisco-based writer of six critically acclaimed books, including his memoir, A Heartbreaking Work of Staggering Genius. More recently he has been in the headlines for his literacy advocacy, in particular the non-profit writing and tutoring centers for children and teens that he has established across the country. However, Eggers was first focused on visual arts before he became a writer, and although his literary career is his primary focus, he is still actively engaged in an art and graphic design practice.

According to the artist, living creatures as subject matter holds a special appeal: “This past year I went back to drawing animals. The process for these pictures is pretty simple: I find an old photo of an animal that somehow has some intrigue, and I use a China marker to freehand a version of that animal onto very smooth paper.” Many of the drawings and paintings integrate short phrases, often drawn from the Bible. Eggers explained, “I think of what that animal might be thinking — if that animal had an antagonistic relationship with humans and was vying with those humans for the favor of a Catholic God.”

Eggers’ work has a singular, “stand alone” quality often associated with graphic design. He has created cover art for rock bands, designed posters for film festival, and contributed illustrations to journals and periodicals.

This is Eggers’ first museum exhibition.