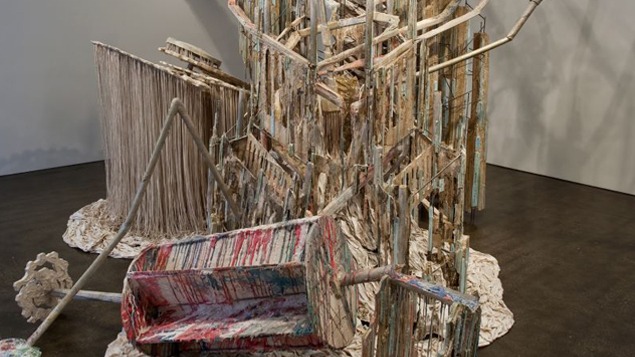 Diana Al-Hadid builds elaborate sculptural installations that investigate past and present ideas about architecture, science, time, and space. Water Thief evokes the structure of a centuries-old water clock invented by distinguished engineer Al-Jazari, who lived in northeastern Syria during the thirteenth century. Water clocks are among the world’s oldest time-measuring instruments, and were used to track the passage of time based on the flow of water. In ancient Greece, water clocks were known as clepsydras—or water thieves—that were sometimes associated with diminishing water flow.

While Al-Hadid does not attempt to replicate a specific historical water clock, she is careful to faithfully suggest the mechanical inner workings of such an instrument. Parts of her sculpture imaginatively resemble the channels, gutters, gears, tanks, siphons, drums, waterwheels, and reservoirs that would have been common to the ancient devices.

Al-Hadid invites us to walk in and among this tangled, labyrinthine device to compare its monumental scale to the ostensible fragility of its ornamentation. Made from fiberglass, polystyrene, plaster, wood, steel, and paint, the materials that comprise the structure connote the decomposing ruins of a grand architectural experiment. In fact, Al-Hadid’s Water Thief might be interpreted as a ruin itself, as “water” appears to leak and spill forth from the fragments of the apparatus. Like the hundreds of other mechanical devices invented by Al-Jazari in the thirteenth century—most of which are unknown or largely forgotten in the West—Water Thief tempts its viewers to revisit the ideas and theories of another time and place.