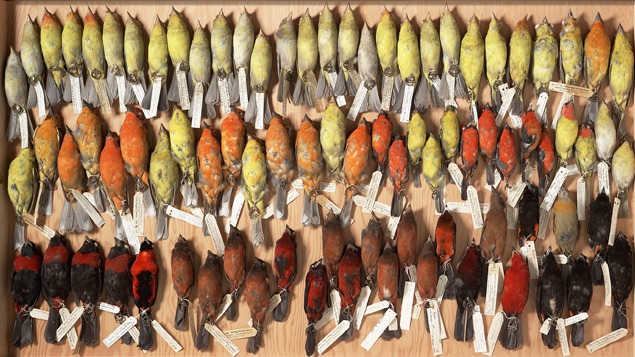 Controversy surrounding theories of evolution have continually unfolded since British scientist Charles Darwin published his book On the Origin of Species in 1859. For contemporary printmaker Donald Farnsworth, Darwin’s writings offered the opportunity to explore notions about science, the natural world, and the chasm that sometimes exists between observation and belief. A collector of strange and beautiful insect specimens and a digital technology enthusiast, Farnsworth produced his Origin: Species series using bugs from his own collection, as well as specimens from the California Academy of Sciences in San Francisco. The highly detailed images were digitally captured and then overlaid onto printed chapters of Darwin’s On the Origin of Species.

Farnsworth employs his equipment–including a flatbed scanner, a scanning back camera, and digital imaging software–to recreate shadows and depth, intensifying the realism of each specimen’s appearance. The resulting digital prints have a dramatic scale and a three-dimensional, trompe-l’oeil quality that arrests the eye. There is a calculated directness in Farnsworth’s work: an invitation to forget what you think you know and to simply look. He invites viewers to engage with the works’ content as fresh, raw data—just as pioneering naturalists like Darwin did in the years before museums and biology departments were commonplace. At the same time, the raw data of Darwin’s text reveals Farnsworth’s admiration for the epistemology of science. By subtly locating the specimens within a scientific context, Farnsworth reminds viewers that a considerable wealth of observation-based research informs the development of
scientific theories like evolution.