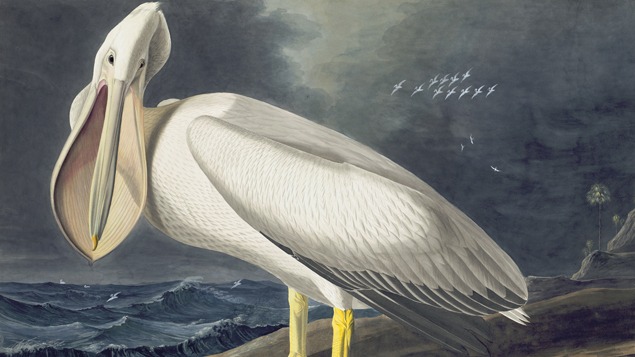 Explorer, Naturalist, Artist: John James Audubon features fifty large-scale prints by the legendary artist and naturalist John James Audubon (1785-1851). Perhaps the most influential wildlife artist in American history, Audubon’s seminal work Birds of America (completed in 1838) is widely recognized by art historians and naturalists alike as the greatest natural history publication of all time. From 1820 to 1838 Audubon worked on his Birds of America project, in which he documented the natural history of much of the central and eastern United States and painted almost 500 species of birds. Audubon drew birds frommlife whenever possible, rather than from specimens alone. He spent much of his life traveling the continent observing them in significant depth and detail. He also took extensive notes on the birds’ food and habitat preferences, and watched them move, interact, and behave. His paintings depict birds in action, relaying the complex interrelationship between animals and their natural habitats. The watercolors for Birds of America convey the immediacy of Audubon’s field observations—painted directly from nature. Although he used the medium to quickly render his subjects, he further elaborated on the works by using pastel, gouache, glazes, varnishes, and touches of oil paint to create detailed compositions.

Born in 1785, John James Audubon was an explorer, naturalist, writer, and one of the most important artists of the nineteenth-century. Audubon was the son of French merchant and sea captain Jean Audubon, and Jeanne Rabine, a chambermaid who died in a slave uprising shortly after his birth. Raised lovingly by his stepmother and father, in the French countryside around Nantes, he developed a love of wildlife, especially birds, and of sketching. At age 18, Audubon was sent to Pennsylvania to avoid conscription in Napolean’s army and to manage family farm property at Mill Grove, near Philadelphia. Audubon died in 1851 in New York.