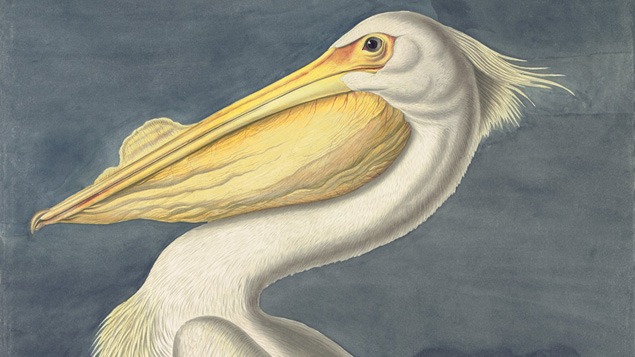 In the first decades of the nineteenth century John James Audubon created one of the greatest and most famous bodies of North American bird art known today. His more than fifty years of artistic production—consisting of paintings, drawings, prints, and writings—resulted in the body of work for which he became most famous: The Birds of America, Audubon’s unparalleled effort to catalog and describe artistically and scientifically the birds of the North American continent.

Audubon’s enormous undertaking began with the creation of more than five hundred watercolor paintings—the basis for a later edition of double elephant folio of prints called The Birds of America, made by the London engravers Robert Havell, Jr. and Sr. between 1826 and 1838. In 1863, at the height of the Civil War and a little more than a decade after her husband’s death, Lucy Bakewell Audubon, the artist’s widow, sold her family’s personal collection of 471 surviving original watercolor paintings to the New York Historical Society. Of these, 435 were paintings Audubon made in preparation for The Birds of America.

Born Jean Rabin in Saint-Domingue (now Haiti) in 1785, the son of a French naval officer and his mistress, he adopted the name John James Audubon when he immigrated to the still-fledgling United States in 1803 at the age of eighteen, avoiding conscription in the Napoleonic wars. Largely self-taught as both an artist and an ornithologist, the paintings from which the prints in this exhibition derive were renowned for their scale and for their inclusion of ornithological information about bird habitats and behaviors, a practice that was both controversial and revolutionary for the time.

Having made many long and difficult excursions through much of frontier America to collect specimens and record them for his project, by the mid-1840s, Audubon’s deteriorating health confined him to his home on New York’s Hudson River. Audubon died there in 1851, at the age of 65, leaving behind the remarkable body of work for which he is remembered.

All of the prints on view in this exhibition are drawn from the collection of the Nevada Museum of Art. They were purchased with funds in memory of Dana Rose Richardson.