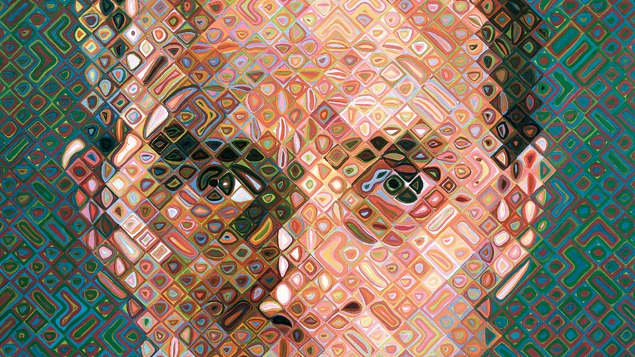 A leading figure in contemporary American art since the 1970s, Chuck Close is celebrated for his successful efforts to reinvigorate the field of modern portraiture. Best known for the monumental faces he has painted, photographed, and most recently woven into tapestries, Close has developed a formal methodology based on color and structural analysis that radically departs from traditional modes of portraiture. In this exhibition, a range of works by Close will be featured, alongside portraits by some of the twentieth century’s leading artists including Cindy Sherman, Shirin Neshat, Gerhard Richter, and Andy Warhol. These artists are noted for the innovative ways they approach issues of identity, autobiography, and narrative in their works.

Portraiture has long been an important mode of representational art and has long history. Archaeological evidence reveals that the earliest extant portraits date to the Egyptian era, when the likeness of the human face was commonly used on funerary sculptures. Portraiture continued to flourish from the Roman period through the Renaissance as artists were commissioned to paint flattering images of their wealthy clients. Beginning in the mid-twentieth century, however, many artists began to reconsider the conventional function of the portrait. Turning away from tradition, artists like Alexander Calder began to use the face in humorous and comical ways, while others such as Cindy Sherman and John Baldessari addressed issues of personal identity. Still others artists, including Anselm Kiefer and Jim Dine used portraits to explore deeply personal and autobiographical narratives. Faces examines this wide range of artistic approaches to capturing the myriad expressions of the human face.