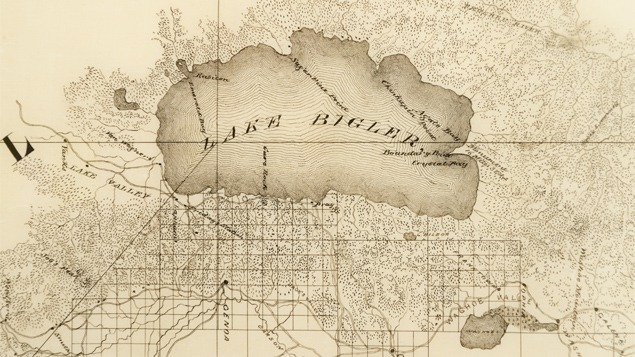 Nineteenth-century American understanding of the Sierra Nevada was shaped by the maps, sketches, photographs, paintings, and written accounts produced by the first Euro-American pioneers to visit the region. John C. Frémont, a second lieutenant in the U.S. Army Corps of Topographical Engineers, is considered the first Euro-American to view Lake Tahoe on February 14, 1844 from Red Lake Mountain, a peak near what is today Carson Pass. The body of water we now call Lake Tahoe was referred to variously in the nineteenth century as Mountain Lake, Lake Bonpland, and Lake Bigler.

The discovery, mapping, depiction, and cultural assimilation of Lake Tahoe by Euro-Americans is linked to the exploration and settlement of the Great Basin—the last region of the United States to be officially explored and defined by the federal government. After Tahoe’s initial discovery by Euro-Americans, most early nineteenth century pioneers approached the Sierra from the east, after passing through the long desert stretches of the Great Basin.

By the mid-1850s, wagon roads through the Sierra, constructed primarily to service gold and silver mines, became better defined. These routes made the region accessible to travelers from both eastward  and westward directions—including artists and photographers.