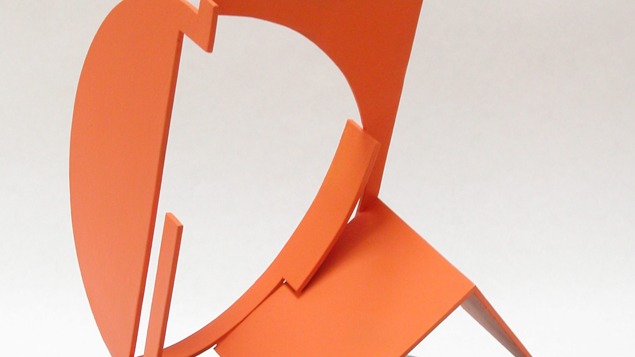 Renowned American sculptor Fletcher Benton is best known for cutting, folding, and realigning two-dimensional sheets of steel into three-dimensional objects that seem to defy gravity. His choice of materials reflects his concerns for color, tonality and the rich luster of the metals he uses. The simplicity of each shape abstractly reveals forms of nature, geometry and human activity. This unique exhibition invites visitors to explore the Benton’s creative process, by re-creating the artist’s studio in one of the Museum’s galleries.

The exhibition will include a replica of the artist’s work table with twenty-five to thirty small studies and maquettes. Large photomurals of the artist’s studio will cover the walls, creating an immersive experience for viewers, which will help to provide an in-depth examination of the artist’s creative process.

Benton was born in Jackson, Ohio in 1931 and graduated from Miami University in Oxford, Ohio. From 1964 to 1967, he taught at the San Francisco Art Institute, and from 1967—86 he worked as an associate professor and then professor at San Jose State University. Although Benton began his career as an abstract painter, he soon became frustrated with the limitations of painting on canvas. Given his early experiences in the commercial sign industry, Benton began to incorporate movement and geometric shapes into his two dimensional work. This experimentation led to his early kinetic sculptures, which he referred to as three-dimensional paintings. Later in his career, Benton began to create full three-dimensional sculptures designed to be viewed from all angles, eventually abandoning kinetic sculpture altogether.

Benton’s sculptures are included in the collections of the Whitney Museum of American Art, the San Francisco Museum of Art, the Cantor Art Museum at Stanford University, and the Denver Art Museum.