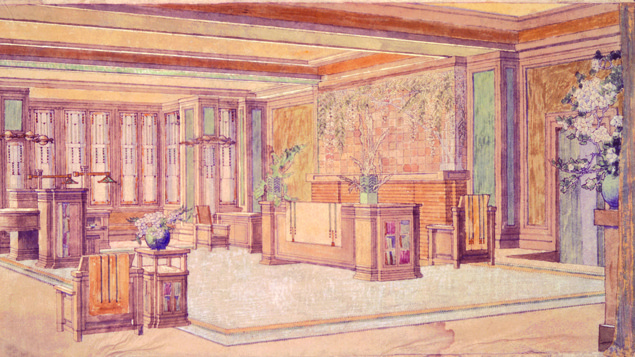 During his remarkably prolific 70-year career, Frank Lloyd Wright was committed, not only to the development of a truly American style of architecture, but also to the creation of furnishings and accessories that were both functional and beautiful—objects that enhanced his revolutionary spaces. Frank Lloyd Wright and the House Beautiful presents Wright’s passion for creating a new way of life for Americans through architecture. In particular, the exhibition focuses on his skillful creation of harmony between architectural structures and interior design.

The phrase “house beautiful” was coined in the early 20th century to refer to a principle of architectural and social reform which established that quality of life could be improved by redesigning one’s everyday environment. Wright believed that the design of an object or space could be elevated without sacrificing its function or accessibility. As he said, “I believe a home is much more a home for being a work of art, and I think until it is a work of art, it lacks the essential characteristics of a home.”

Frank Lloyd Wright and the House Beautiful features approximately 100 objects including furniture, metal work, textiles, original drawings, publications, and accessories on loan from the Frank Lloyd Wright Foundation and other public and private collections. Reflecting both Wright’s distinctly American sensibility and his desire to fully integrate interior furnishings and architecture, the objects function as critical components of the unified, organic spaces Wright sought to create. He was committed to the idea that the average American’s life could be transformed by creating harmony in his or her living environment; the objects featured in this exhibition exemplify this philosophy—the philosophy of the house beautiful.