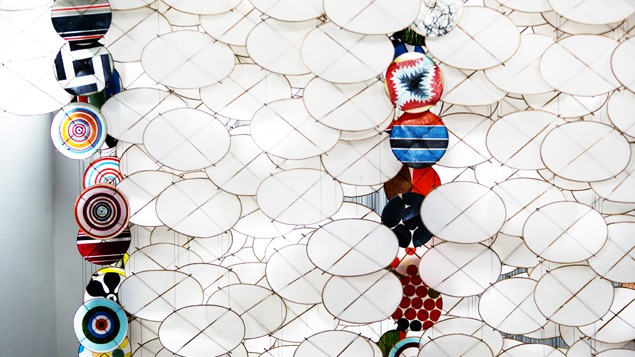 Jacob Hashimoto:
Here in Sleep, a World, Muted to a Whisper

In celebration of the Museum’s 80th Anniversary in 2011, contemporary artist Jacob Hashimoto was commissioned to create a large-scale, site-specific artwork to hang in the Donald W. Reynolds Grand Hall and Atrium. Hashimoto’s sculptures—fabricated from thousands of small “kites”—are made from bamboo-stiffened rice papers not unlike those used for centuries to make traditional Japanese kites. The three-dimensional cascading form—which could be interpreted as a peaceful, floating cloud or a spiraling vortex—is suspended by nylon monofilament and responds specifically to the Museum’s unique architecture and changing light.

Born and raised in Greeley, Colorado, Hashimoto studied at Carleton College in Minnesota, and then the School of the Art Institute of Chicago in Illinois. He has installed major sculptures all over the world—from the Museum of Contemporary Art, Chicago and the Saatchi Gallery in London to the Museum of Contemporary Art, Rome and the Palazzo Fortuny in Venice. Hashimoto lives and works in New York.