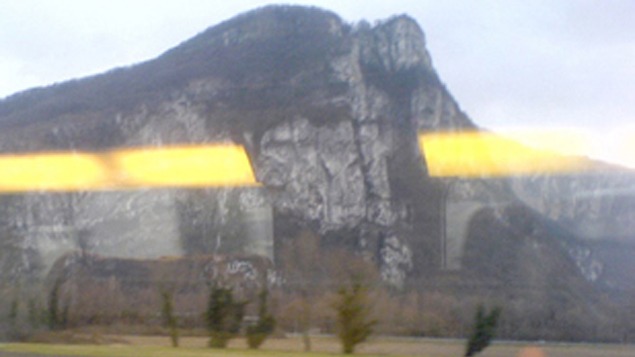 Jean-Pierre Bonfort’s Travelling project is comprised of cellphone photographs taken during multiple trips over a five-year period from a moving train between Grenoble and Paris, France. The images do not appear in sequence, but instead are arranged by the artist to balance subject matter, light, and color. The work is thus not a record of the journey so much as of the artist’s state of mind.

Bonfort trained as a traditional landscape photographer, but in 2005 he began to use his cellphone’s camera as his primary tool. This modest appliance does not allow him to manipulate the image: to zoom, to change lenses, to choose shutter speeds, depth of field, or any of the thousands of options available on digital cameras. The cellphone camera limits his view of the world to a fixed wide-angle gaze.

Bonfort often prints his images on inexpensive materials, and creates small books. In 2011 Bonfort visited Reno, Virginia City, and Pyramid Lake and took hundreds of pictures with his cellphone. Bonfort’s books from that trip, and other trips, are featured in the CA+E Research Library.