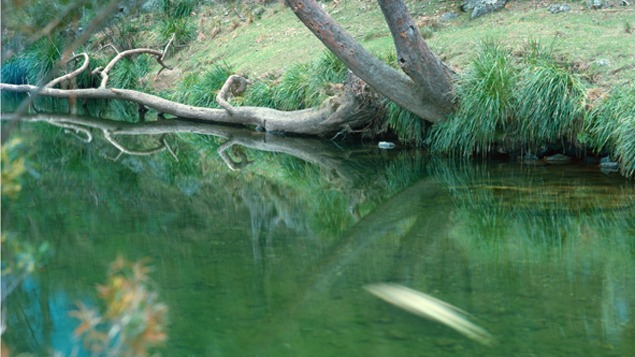 In 1988 Australian artist John Reid captured on film the blurred image of what appeared to be a hominid creature underwater. The location was a remote cave high in the mountains of New South Wales, a region of ancient forest under threat from logging. For sixteen years, Reid explored the mountains in order to track down what he describes not as a scientific discovery, but an artistic one.

When Reid made public his discovery, he received national media attention for his images of what he called “Fishman,” a previously undiscovered hominid. In the process, he drew attention to the plight of the forests, which have since been preserved in a string of parks, in particular the Monga and Deua National Parks, which holds the Wyanbene Caves where he first encountered the “Fishman.”

Reid’s photographs trace his effort to track down the elusive creature, as well as document some of these forested valleys that are so steep and deeply forested that Australian artists since the 18th-century have had difficulty in portraying them.

Part performance art, natural history theater and conservation campaign, “Fishman” is a unique project that has become legendary in the Southern Hemisphere. The Center for Art + Environment now holds the artist’s archive from the project.