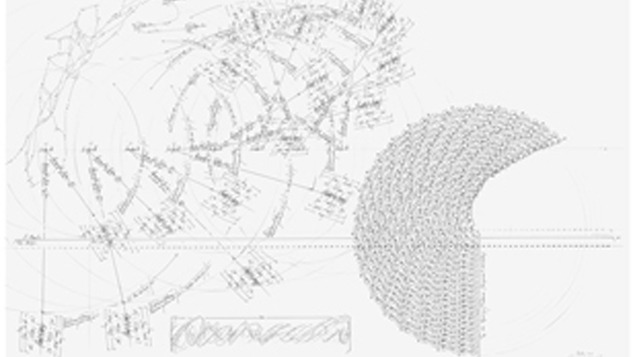 The Nevada Museum of Art is pleased to present a solo exhibition of drawings by German artist Jorinde Voigt, recent winner of the prestigious Guerlain Drawing Prize in 2012. Although Voigt has exhibited widely internationally, this will be her first solo exhibition at an art museum in the United States.

In her large-scale drawings, Voigt makes reference to a wide-range of subjects—from weather and geography to music, literature, and philosophy. Far from objective representations, however, her lyrical notations are rendered in a unique visual language that is not easily deciphered. Composed of both objective and subjective elements, Voigt’s algorithmic systems make visible an invisible world that is complex in its shifting movements and overlapping influences.

Jorinde Voigt was born in Frankfurt, Germany and currently lives in Berlin. The Museum of Modern Art, New York and the Musée d’art moderne du Centre Pompidou in Paris have recently acquired Voigt’s work for their permanent collections. She has had exhibitions at the Museum Van Bommel van Dam, in The Netherlands, the NKV Nassauischer Kunstverein, Wiesbaden, Germany, Gemeentemuseum, The Hague, Netherlands, and the Von der Heydt-Museum, Wuppertal, Germany, and the David Nolan Gallery, New York.