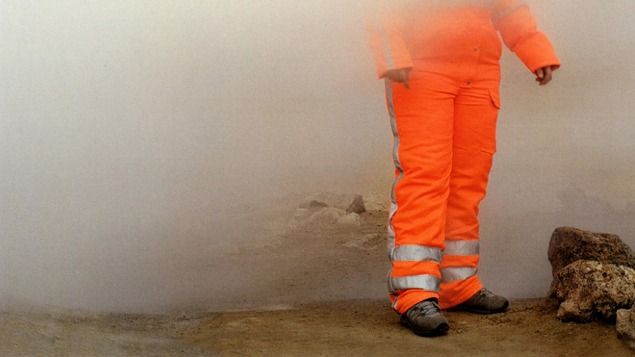 Chicago photographer Judy Natal has been working in several sites around the world since 2006 to construct a future-based narrative about humans and the environment. Future Perfect, composed of photographs, writings, and sculptures created by Natal from found objects, begins in 2040 and moves backwards a decade at a time while utilizing imagery from three disparate locations.

The series takes us among the geo-engineered volcanic landscapes of Iceland, where people are shrouded in steam and nature is littered with inscrutable objects, and into the utopian science experiment of Biosphere 2, an experimental habitat constructed in Arizona from 1987 to 1991 by a group of engineers and artists. Meant to be inhabited as a sealed unit by a crew for a year at a time, “B2” led to a greater understanding of both natural and built ecologies. The third environment is the Las Vegas Springs Preserve, the site of the artesian well in the Las Vegas Valley that was first used by Native Americans, then Mormon farmers and the early railroads, and finally the city of Las Vegas. During the 1990s it was converted into a public theme park meant to educate visitors about the use and conservation of water in the desert.

Future Perfect is loosely a science fiction, but one based on science fact at each site, all of them engineered for studying and understanding the use of local ecologies for human purposes. Neither apocalyptic nor optimistic, the work allows the viewer to imagine different scenarios for the future.