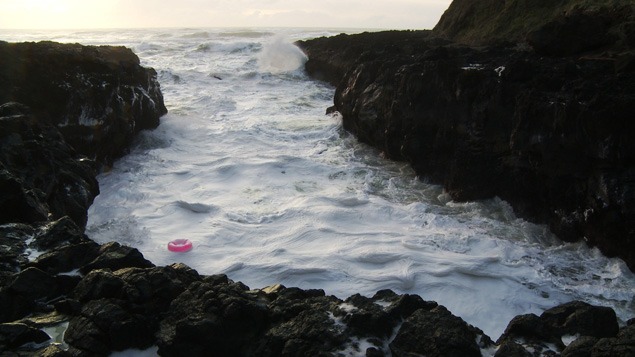 Kevin Cooley’s work examines the relationship between the natural and built environment and the moments when the two collide. This exhibition presents a concise selection of his video work. Devils Churn (2010), Path (2008), Toss (2010), and Saguaro (2010) highlight simple meditative gestures – a bobbing inner tube, floating balloon, waving flag and tossed ring – that serve as surrogates for the endurance of the human spirit in the face of an indifferent nature. Disparate and powerful landscapes play the role of nature in the videos including, the Oregon Coast, Northern Iceland, Southern Utah, and Western Arizona. Cooley did not edit these videos; instead they present moments as they unfolded in real time. Cooley recounts simple, elemental moments that his careful framing and patient depiction elevate to a higher order. The fluorescent pink in each video knits the disparate actions together into a subtle yet personally epic struggle against nature.

In a classical sense, Fire, Earth, Wind, and Water define the world we inhabit. The tension between these forces, and our struggles to exist among them, provides the framework for the series. Each video presents a real-time tableau in which two elements contend. Either a force of nature, or else a human figure or human stand-in, acts as protagonist in these subtly filmed dramas.

Cooley received a MFA in photography from the School of Visual Arts, New York City and Primal Forces will be his second solo museum exhibition. His work, Remote Nation, (comprised of 100 analog TV sets placed throughout a vacant NYC apartment building and playing programs controlled by his father’s remote control in Colorado) was recently on view in New York, seen from the High Line and his large scale video installation Skyward was recently on view at Disjecta Contemporary Art Center in Portland, OR. Upcoming exhibitions include a new two-channel video installation, A Thousand Miles an Hour, at Ryan/Lee Gallery in New York; additionally, Cooley’s work will be included in Modern Alchemy: Experiments in Photography, The Heckscher Musuem of Art, Huntington, NY, in 2014-2015.