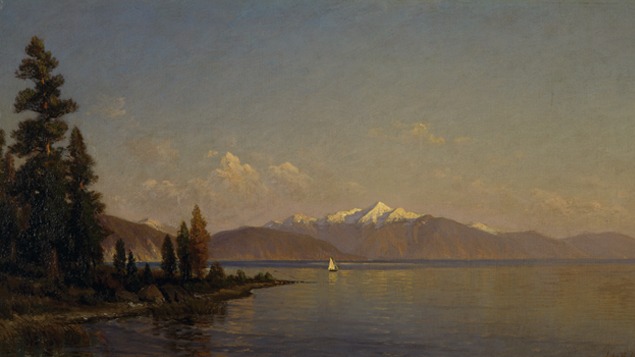 During the Golden Age of American landscape painting in the second half of the nineteenth century, Lake Tahoe and its nearby lakes inspired paintings by artists who were primarily associated with the burgeoning art world of San Francisco. Lake Tahoe itself did not become a subject for serious artists until the 1860s after the discovery of silver on the nearby Comstock. Early tourists to the lake included the influential Unitarian minister, Thomas Starr King, who visited in the summer of 1863 and delivered a rapturous sermon on the beauties of the lake to San Franciscans upon his return—surely enticing many artists to visit.

From the 1860s through the 1880s Lake Tahoe was depicted by artists with an enhanced sense of realism known as the Hudson River School style. Painters associated with that style sought out beautiful natural landscapes and executed their paintings with considerable realism. At the same time, they sought to convey a spiritual or transcendental presence in their paintings to underscore the widely held nineteenth-century belief in nature’s divine origins. Like the California geologists John Muir and Joseph LeConte, many artists believed that nature was God’s handiwork. Painters visiting the Sierra reproduced natural features in ways that inspired thoughts of divinity: mountains were sublime and still water serene.

Many of America’s most noted nineteenth-century artists including  Albert Bierstadt, Thomas Hill, William Keith, John Ross Key, and William Marple considered Lake Tahoe a worthy subject for their landscape paintings. For most city dwellers of the time, the Sierra was considered a remote wilderness destination. However, one might experience a taste of the wilderness through the vicarious agency of a landscape painting. Contemplating a spiritually charged view of the lake in one’s San Francisco or New York living room could provide much of the same magic as being there in person. When exposed to a beautiful painting, the clamor and stress of urban life might be forgotten.