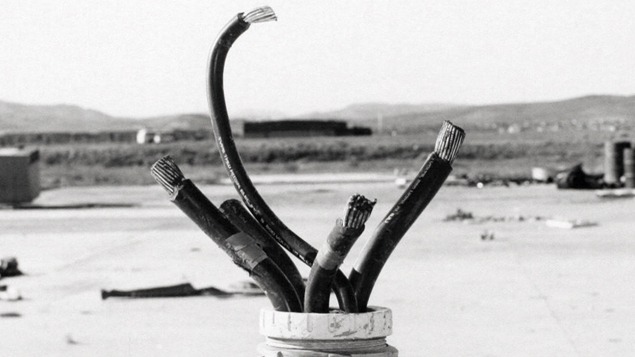 Lewis Baltz:
In the Desert

Lewis Baltz: In the Desert will debut at the Nevada Museum of Art from April 3—September 26, 2010. The exhibiton will feature 28 photographs by internationally-renowned photographer Lewis Baltz, who is recognized as an icon of contemporary photography due to the pivotal role he played in the New Topographics photography movement that emerged in the mid-1970s. Two series of photographs Nevada and Near Reno will be included in the exhibition. These series consist of black-and-white photographs that Baltz took of construction sites and abandoned areas in the northern Nevada desert region between 1977 and 1986.

Many of the images in the exhibition are those for which the artist became best known. The Nevada portfolio was completed while Baltz worked as an artist-in-residence at the University of Nevada, Reno under the Nevada Arts Council Artist-in Residence Program. Nevada includes images of stark desert terrain and the discarded objects and relics often found in the desert. Near Reno is a suite of photographs Baltz made when he returned to northern Nevada in June of 1986. The series examines various construction sites and documents evidence of human influence on the surrounding landscape. Both series prove that the American West was a source of continual inspiration for Baltz, and that he returned time and again to the region, even though he had already achieved national and international success as an artist.

The works in the exhibition are from the Nevada Museum of Art’s signature Altered Landscape photography collection, which includes over 700 photographs addressing issues such as suburban development, the mining industry, military installations, and the nuclear legacy in the American West.

Baltz was born in Newport Beach, California in 1945 and was raised in nearby Orange County, California. He worked as a part-time laborer in the construction industry following high school, which some scholars have linked to his ongoing and lifetime interest in photographing suburban developments and the changing landscape. After receiving a BA from the San Francisco Art Institute in 1969, he went on to earn an MFA from the Claremont Graduate School in 1971.

As early as 1971, New York gallerist Leo Castelli—who had championed the work of Pop artists like Andy Warhol only a decade earlier—exhibited twenty-five of Baltz’s tract home photographs in his East Coast gallery and essentially launched his career. In 1975, Baltz was included in the legendary and influential exhibition New Topographics: Photographs of a Man-Altered Landscape that was mounted at the George Eastman House in Rochester, New York. This exhibition changed the direction of contemporary photography and its influence is still felt widely in the art world today. Although Baltz established his career and became well-known internationally as a photographer of the American West, he moved to Europe in the early 1980s and now lives in Paris and Venice.