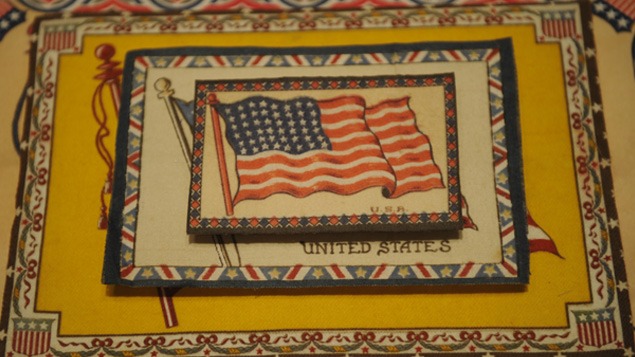 Long May She Wave:
The Graphic History of the American Flag

Arguably one of the most recognizable icons in the world today, the American flag has enjoyed a long history of graphic renderings and artistic re-interpretations. Although the Continental Congress agreed in 1777 that the United States flag should be comprised of stars and stripes in red, white, and blue, more than a century passed without formal design regulations—yielding a wealth of exuberant and unbridled creative manifestations of the national banner.

From Civil War-era flags and Native American moccasins to political campaign buttons and original flag art, Long May She Wave: The American Flag assembles nearly 5,000 American flag-related objects and artifacts from the private collection of Kit Hinrichs, one of the world’s leading graphic designers and a partner in the international design firm, Pentagram. This exhibition is planned to coincide with the 2008 United States Presidential elections.

For millions of people, the American flag embodies the values, ethics, strengths, and foibles of the United States. It is a symbolic icon that is loved and cherished by some and hated and reviled by others. Countless men and women have sworn allegiance to the flag—and many have given their lives defending the values it represents. In this unique collection, “the flag is presented in an extraordinary array of celebratory, ceremonial, political, commercial, and artistic settings,” according to Gerard C. Wertkin, Director of the American Folk Art Museum.

The range of objects and memorabilia presented in Long May She Wave is fascinating for what it reveals about the history, culture, and political climate of the United States. Together the objects comprise their own genre of folk art and are a unique part of the American heritage.