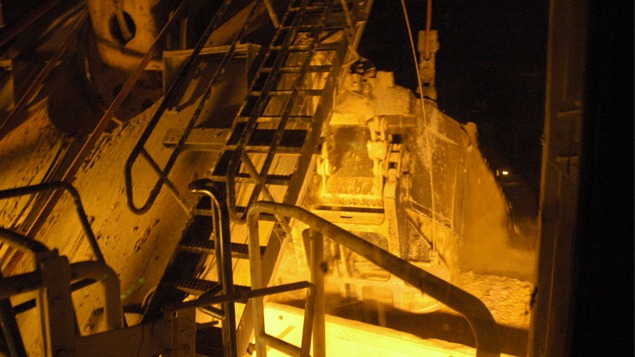 China Town is a video made by artist Lucy Raven as she followed the path of copper ore from an open pit mine in eastern Nevada to China, where it was eventually processed into copper wire. The ore was first taken on trucks to Wendover, a city on the Nevada-Utah border and then sent on railroad cars to Vancouver, Canada. Next it was shipped to Nanjing, China, and finally transported to a plant in China’s interior where it was smelted, refined, and extruded into copper wire. During Raven’s journey she took more than 60,000 digital photographs, which she then narrowed to 7,000 and edited into an animated sequence that comprises the video. Raven also recorded ambient sounds along the way, which became the soundtrack for the film.

China Town begins in the small town of Ruth, Nevada and concludes at the Three Gorges Dam on the Yangtze River in China. There, electrical wires (fabricated, in part, from Nevada ore) transfer electricity across China to power the metropolis of Beijing. Raven’s film invites meditation on the ways that landscapes are sometimes exploited, abandoned, and re-used over time. For example, old mines, such as those in Ruth, Nevada, were reopened in response to China’s need to modernize, a drive that also led China to dam the Yangtze River.

Raven’s film also draws attention to cultural ironies surrounding historical and contemporary production and consumption of resources. In the 1880s, most of Nevada’s mining laborers were of Chinese descent. They often lived in segregated areas of the community known collectively as “China Towns,” and their labor aided the industrialization of America in the late nineteenth century. Today, as Raven’s film points out, Nevada’s resources are exported on a global scale to help fuel the economies of nations half-way around the world. The title of Raven’s film China Town encourages viewers to reconsider the age-old phrase “dig a hole to China” by asking what it really means to “get wired.”