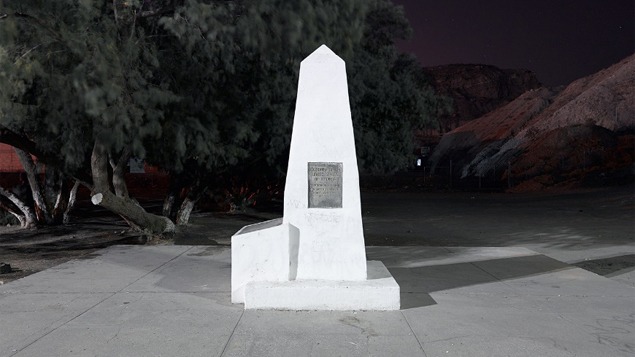 David Taylor began photographing along the U.S. Mexico border between El Paso/Juarez and San Diego/Tijuana in 2007. The border is demarcated by 276 stone obelisks, most of which were installed from 1891-95. In 2014, Taylor finished documenting all of the monuments that mark the international boundary west of the Rio Grande. This undertaking led to encounters with migrants, U.S. Customs and Border Protections agents, human smugglers, members of the civilian border-watch group known as the Minutemen, and residents living along the border.

Taylor traveled both alone and in the company of agents, and his photographs were published in the book and portfolio Monuments, which contains views of all the border obelisks. While Taylor worked on this project, the Border Patrol doubled in size and the federal government constructed more than 600 miles of pedestrian and vehicular fencing, and added seismic sensors to detect the government has attained “operational control” in many border areas—but people continue to cross. Much of that traffic occurs in the most remote, rugged areas of the southwest deserts.

In 2014 Taylor and internationally-renowned Tijuana artist Marcos Ramírez ERRE undertook a second border project, tracing the original 1821 northern boundary of what was then the newly independent Mexico. The line stretched from present-day northern California to the Gulf of Mexico, west of New Orleans. That boundary was never surveyed or physically marked and exists only as a reference on historic maps. For DeLIMITations, ERRE and Taylor marked the 1821 border between Mexico and the western territories of the United States by installing 47 sheet metal markers to mimic the existing monuments. The artists asked the question: “What would Mexico and the United States look like had that boundary been fully realized?”

Monuments and DeLIMITations presents the selections from the border monuments portfolio, one of the markers designed for the mapping project done by ERRE and Taylor, and extensive historical and contemporary materials drawn from the project archives of the Center for Art + Environment Archive Collections.