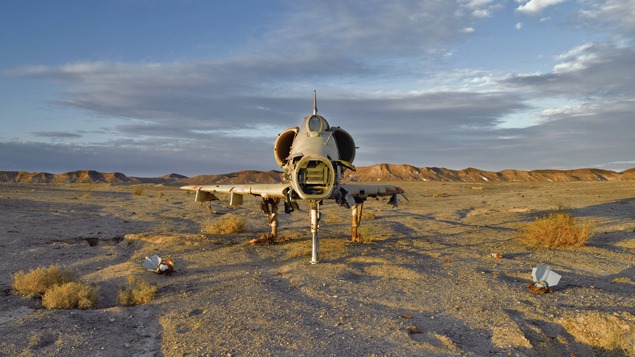 Natural Conflict showcases work by seven established Israeli artists who explore issues that have been ongoing in Israeli society for years. Through the media of video and photography, the artists Shelly Federman, Avi Holtzman, Elyasaf Kowner, Ori Gersht, Roi Kuper, Shai Kremer, and Sharon Glazberg reveal the way that Israeli military presence, booming real estate development, and other environmental issues have both physically and metaphorically impacted the Israeli landscape.

Israel is a small country that claims an area of approximately 8,000 square miles—equivalent to 7.5 percent of the total area of Nevada. Approximately 30 percent of the country’s land is comprised of restricted military zones. These areas include training bases, firing zones, and ground and air exercise zones where public access is prohibited and actions are not monitored. Artists such as Shai Kremer, and Roi Kuper use photography to examine issues related to this contested landscape.

Over the last decade, Israel has enjoyed a significant real-estate and construction boom largely driven by foreign buyers looking for vacation homes along the nation’s Mediterranean coast. Fast-paced construction in the region threatens Israel’s “green lung” and in some cases has led to the privatization of public beaches—topics that Shelly Federman explores in her video work.

While environmental conflicts such as these are universal and enduring, in Israel the relative impact is greater due to its diminutive size and limited open space. Although environmental awareness exists, clear policies for protecting natural resources have evolved slowly and are sometimes challenged by powerful private interests and the needs of the military. This exhibition endeavors to survey the varied visual and environmental realities in Israel through the eyes of the seven artists. Comprised of loaded symbols of the Israeli landscape and culture, common sights, and hidden or unfamiliar places, the works grapple with the real, potential, and endangered beauty of the Israeli landscape with a blend of criticism and subtle sorrow.