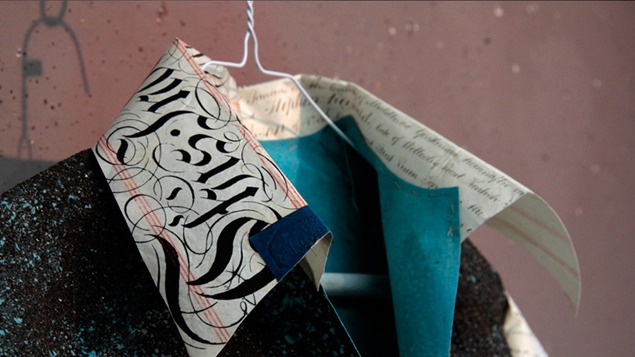 Although artist Peter Liashkov has lived in the American West for over fifty years, he admits that he had never given significant thought to its popular cowboy culture. While in Wyoming, Liashkov constructed a series of cowboy shirts made from historical paper land deeds that were given to him by a friend. He further adorned the shirts with marks resembling traditional cattle brands, which also take the appearance of Cyrillic alphabet letters used in the Russian Language.

Liashkov’s collapsing of these personal and cultural traditions into sculptural objects raise issues of land ownership and suggests the complicated histories lived out by immigrants to the American West.

Born of Russian parents in Rouen, France in 1939, Peter Liashkov immigrated with his family to Southern California in 1955. Primarily a contemporary artist known for his painting and drawings of the human figure, Liashkov recently completed a residency program with the UCROSS Foundation in Sheridan, Wyoming, where he completed a series of sculptural artworks featured in this exhibition.