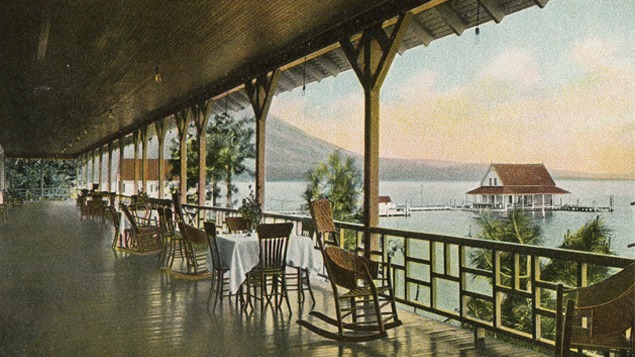 Rise of the Resort – Tahoe and the Leisure Lifestyle

While the Civil War raged in the eastern United States and Tahoe’s lumber industry rose to prominence to service Nevada’s booming Comstock mines, the Lake Tahoe region began its transformation into a landscape of tourism, leisure, and recreation. Easy railroad and automobile access to the region accelerated the growth of resorts around the lake in the late nineteenth and early twentieth centuries, and Lake Tahoe became a place of rest and repose for the social and economic elite.

During this time resorts began to flourish, including Tahoe Tavern and the Grand Central Hotel near Tahoe City, the Glenbrook Inn on the east shore, and the Tallac Hotel on the south shore. As the region became more settled and accessible, artists could easily fold a visit to Lake Tahoe into their Pacific Coast travels, which might have also included a stay at Yosemite.

Many artists produced nostalgic or romantic images of the region, which were readily purchased as souvenirs by visitors and tourists. At the same time, many ofthe San Francisco Bay area’s most prominent architects were commissioned to design private residences in the Lake Tahoe basin, forever changing the nature of its built environment.