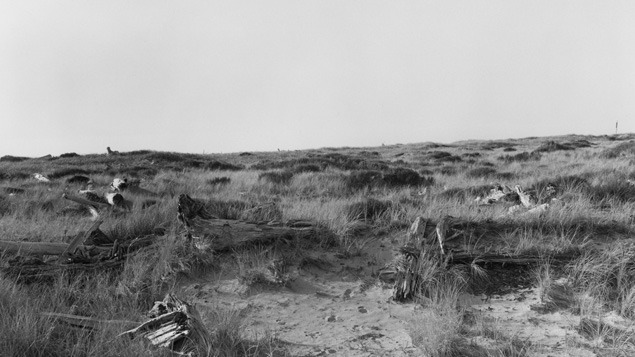 A Road Through Shore Pine contains 18 photographs made by the photographer in Nehalem Bay State Park, Oregon, in the fall of 2013.  In the exhibition, Adams traces a contemplative journey, first by automobile, then by foot, along an isolated, tree-bordered road to the sea. As presented through Adams’s 11 × 14-inch prints, the passage takes on the quality of metaphor, suggestive of life’s most meaningful journeys, especially its final ones. For this group of photographs, all of which were printed by Adams himself, the artist returned to the use of a medium-format camera, allowing the depiction of an intense amount of detail. Through experience gathered over more than four decades, Adams’s trees, especially the tips of their leaves, are etched with singular sensitivity to the subtleties and meanings of light.

Robert Adams was born in New Jersey in 1937, and moved to Colorado as a teenager. Adams was a professor of English literature for several years before turning his full attention to photography in the mid 1970s. His work is largely concerned with moments of regional transition: the suburbanization of Denver, a changing Los Angeles of the 1970s and 1980s, and the clear-cutting in Oregon in the 1990s. He has published many books well-known to those concerned with the American Landscape.