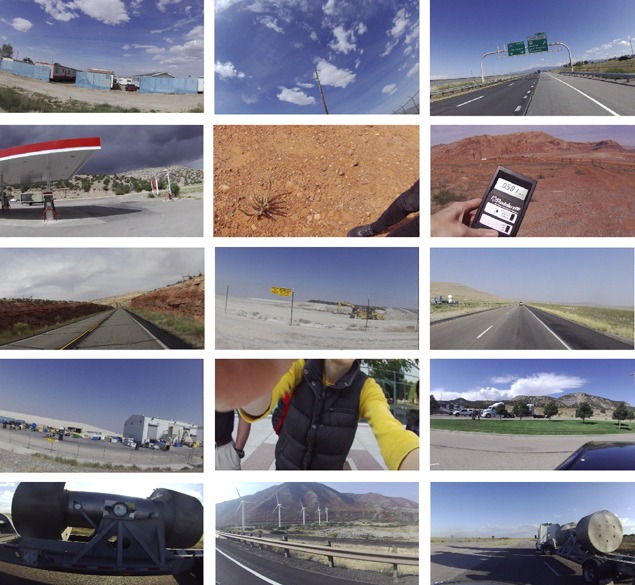 smudge studio:
Look Only at the Movement

Nuclear waste, which ranges from highly radioactive plutonium to materials such as clothing and tools with only low levels of radiation, has been accumulating in the United States since the beginning of the atomic weapons program in the 1940s. In 1957, the National Academy of Sciences recommended that the government excavate deep geologic repositories for the waste, which was considered the safest method of disposal.

In fall 2012, smudge studio (Elizabeth Ellsworth and Jamie Kruse) spent twelve days driving the routes along which nuclear waste is moved in the American West from sites of waste generation to disposal stations. Locations they documented with a car-mounted video camera ranged from the Los Alamos National Laboratory in New Mexico, where nuclear weapons research is conducted to Rocky Flats in Colorado, the former site of a plutonium plant.

Disposal facilities included the uranium tailings disposal cell at Mexican Hat in Utah and the Waste Isolation Pilot Plant (WIPP) in New Mexico. The WIPP facility is America’s only deep geologic repository for nuclear waste, where waste is buried 1,250 feet below the surface in a salt dome. WIPP operations are currently suspended as a result of radiological release in February, 2014.

Ellsworth and Kruse also visited the Department of Energy’s TRANSCOM field office in Carlsbad, New Mexico. TRANSCOM monitors, 24-hours a day via satellite, the transportation of nuclear waste in trucks between sites. A map of the disposal routes and the artists’ journeys appears to the right of the gallery entry.

The U. S. government’s Environmental Protection Agency policies currently require the Department of Energy to prove that Yucca Mountain in southern Nevada—the planned repository for high level radioactive nuclear waste—can safely store wastes through earthquakes, volcanic activity, climate change, and container corrosion for up to one million years. No nation has yet determined a safe way to store high-level waste for that length of time.

This research-based art project also included extensive photography and performance-based art by Ellsworth and Kruse along the journey.

Field Research for Look Only at the Movement was funded in part by the Graham Foundation for Advanced Studies in the Fine Arts, 2012.