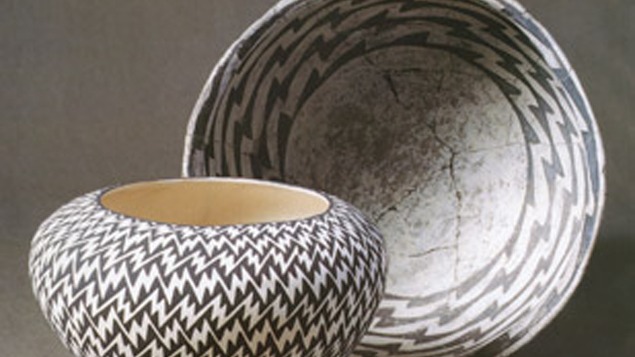 Southwest Pottery – From Anasazi to Zuni:
Selections from the Brenda and John Blom Collection

This exhibition features over 100 pieces of Southwestern pottery produced by some of the most active pottery-producing Native American tribal groups in the Southwest region of Utah, Colorado, Arizona, and New Mexico. The objects on display trace the art of indigenous pottery making from its prehistoric beginnings almost two thousand years ago to the present. The exhibition compares and contrasts techniques, styles, designs, and materials used by artists working in the following pueblos: Acoma, Cochiti, Hopi, Kewa, Maricopa, Santa Clara, San Ildefonso, and others.

All of the works in the exhibition are from the private collection of Brenda and John Blom. Since the early 1990s, they have acquired fine examples of prehistoric and modern pottery from potters, traders, shops, and pueblo villages in the Southwest. “Southwestern pottery is not only one of the world’s important art forms,” Blom explains, “it is the most accessible.” The Bloms began collecting pottery during a trip to Santa Fe in 1991 with their friends Allan and Carol Hayes. Since then, John Blom and Al Hayes have co-authored three books on Southwestern pottery, and the Bloms have amassed a collection of over 1,500 pots.

All of the works in the exhibition are from the private collection of Brenda and John Blom.