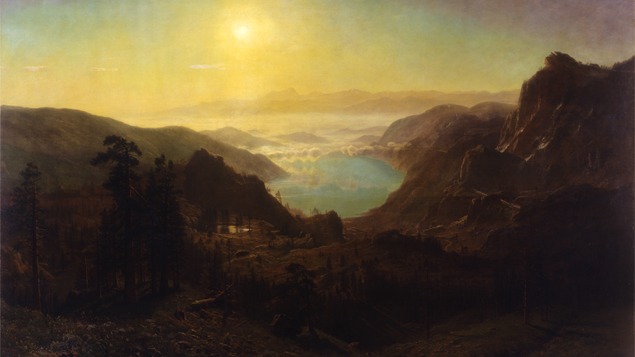 The Sierra Nevada range was a physical and symbolic obstacle to America’s western expansion in the nineteenth century. The legendary struggles of the Donner Party in the winter of 1847, along with an enterprising drive to surmount the summit via railroad, fueled a young nation’s “Manifest Destiny” to stretch its boundary from coast to coast. Artists depicted Donner Lake, the closest body of water to Donner Summit, more frequently than any other in the Sierra range. Unlike the flat, picturesque expanse of Lake Tahoe’s surface, the view of Donner Lake from the summit offered a dramatic, sublime vista layered with historical and symbolic significance.

Visiting artists, photographers, and other tourists often lodged at the Summit Hotel near the top of Donner Pass. Built in 1870, the hotel was a way station for travelers on the Central Pacific Railroad (completed in 1869) and a destination from which travelers could explore the surrounding mountain terrain. For the most part, early photographers such as Alfred A. Hart, Andrew Russell, and Carleton E. Watkins, as well as painters including Albert Bierstadt and Thomas Hill, were drawn to the region because of lucrative commissions provided by railroad executives who sought grand images to celebrate and promote their transcontinental accomplishments.

The American conquest of the now-legendary summit predicted not only the joining of east and west with rails of steel, but the development of the entire far western United States—to which the Tahoe region stood as both barrier and gateway.