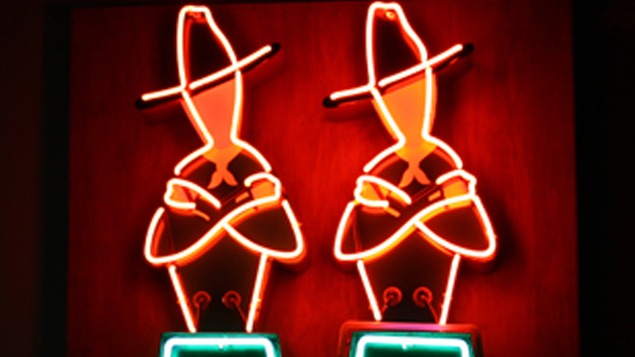 Celebrate a bygone era during this exhilarating presentation of vintage neon signs that once graced some of Nevada’s most iconic restaurants, casinos, hotels, and business establishments. From flashing incandescent bulbs to candy-colored neon tubes, the nostalgic pieces featured in The Light Circus: Art of Nevada Neon Signs have not been seen publicly since they illuminated street side locales decades ago. Presented in the Museum’s Feature Gallery, the exhibition on view October 13 through February 10, 2013.

The iconic M-shaped cowboy chaps from the long-demolished Mapes Hotel Casino have been re-electrified and will hang alongside the flickering bulbs of Reno’s Harold’s Club and Nevada Club signs, as well as those of the Sahara, a longtime casino icon of the Las Vegas stip. Other forgotten favorites that have been refurbished for the exhibition include signs from Parker’s Western Wear, the Holiday Hotel, and El Cholo, one of Nevada’s oldest Mexican restaurants located in Las Vegas. A last minute addition to the exhibition includes the sign that hung for many years above Reno’s legendary Deux Gros Nez coffee shop, which closed in 2006.

For well over a decade, Reno- collector Will Durham has worked to build this collection of vintage neon signs. For the past year, Durham and the Nevada Museum of Art spent countless hours restoring the light fixtures, controls, and electrical components of each piece, along with their painted and porcelain surfaces. For Durham, who acquired his first sign in 1996, collecting the pieces has been a labor of love. In many cases, he has gone to great lengths to save signs that would have otherwise been discarded. In some cases, salvaging the signs took years of persistence, but Durham recognized that saving them was crucial to preserving Nevada’s history—and that sharing them with the public was even more important.

City of Reno Arts and Culture Commission, Charlotte and Dick McConnell and the Nevada Arts Council, a state agency, and the National Endowment for the Arts, a federal agency