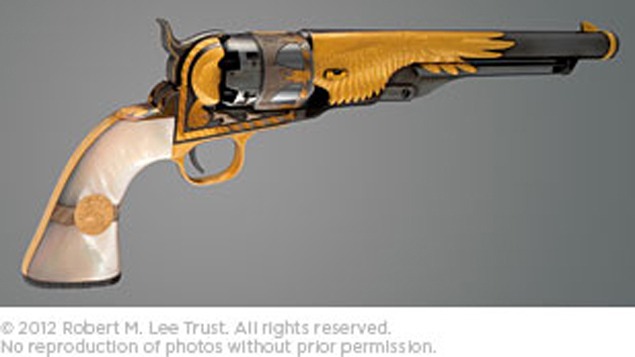 The most distinguished name in decorative firearms in America is Tiffany & Co. — a surprise to those who might otherwise recognize the firm as a legendary purveyor of fine silver, jewelry and luxury objects. Founded in 1837 by Charles Lewis Tiffany, what became Tiffany & Co. commenced business just one year after the young inventor Samuel Colt registered his new designs for revolving pistols and long arms with the U.S. Patent Office. In the 175 years since then, the paths of Tiffany & Co. and Colt have crossed many times. Among the other American gun makers with ties to Tiffany & Co. are Henry Deringer, Winchester, and Smith & Wesson.

The Robert M. Lee Collection is recognized as the finest selection of Tiffany & Co. arms privately owned. The collection of items in this exhibition — including three revolvers, four pistols, one rifle, and one presentation sword — is rivaled only by those on display in the Robert M. Lee Gallery of American Arms, at The Metropolitan Museum of Art, New York.

Tiffany’s production of presentation swords and fine guns began in the 1850s, reached a peak during the Civil War period (c. 1861-65), and continued through the close of World War I (c. 1918). The art of Tiffany & Co. arms was revived c. 1982, and remained active until c. 2001, with innovative modern era designs created by the firm’s Corporate Division. The Tiffany and Co. items in the exhibition span just over a century — they were made as early as 1893 and as recently as 1994.

All of the rare arms in the exhibition are featured in a series of books being published by Yellowstone Press, under the umbrella title The Art of the Gun. The first book in the series, Magnificent Colts Selections from the Robert M. Lee Collection, will be released in January 2012. It will be available in the Museum Store.

The objects included in this exhibition are from the private collection of Robert M. Lee. This exhibition will be presented in the Feature Gallery.