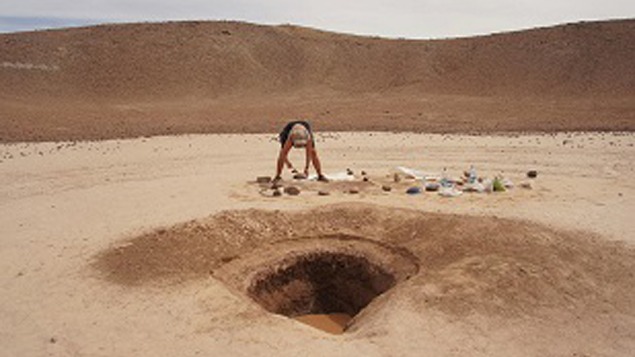 Minerals have been used as a source of pigment ever since humans began making rock art from ochre in Africa, Australia, and Europe more than 300,000 years ago. Ulrike Arnold, who lives in Germany and Arizona, began using earth minerals for her paintings in 1980.

In 2002 Arnold met the owners of the Southwest Meteorite Laboratory, a business in Arizona that supplies meteorite thin sections to NASA and other scientific organizations around the world for study purposes. The laboratory provided her with the dust generated from sectioning meteorites found in China, Namibia, Greenland, Argentina, Arizona, and New Mexico.

To paint with these earth minerals, Arnold grinds stones and rocks into a paste that she mixes on location with an acrylic binder. To work with the meteoritic materials, Arnold spreads her canvases on the ground, applies glue onto the surface then pours the fine particles of iron, nickel, and chondrules over the surface. Chondrules are primitive compounds that are the oldest solid material found in our solar system, and building blocks of the planets.

Arnold’s work incorporates terrestrial minerals from 200 million years ago, and meteoritic dust as old as 4.5 billion years. Her paintings embody the geology of the remote locations in which she works–from Chile’s Atacama Desert and remote Australia to Easter Island¬–as well as the formation of the planets. The paintings seek to evoke the emotional connection between Earth and Heavens, sky and ground, a connection that has been painted from prehistoric time until the present.