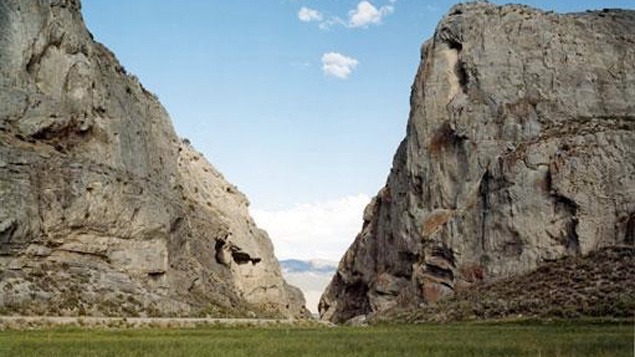 Victoria Sambunaris:
Taxonomy of a Landscape

Each year for the last ten years, Victoria Sambunaris (American, born 1964) has set out from her home in New York to cross the United States by car, alone with her camera. Her photographs capture the expansive American landscape and the natural and fabricated adaptations that appear throughout it. In conjunction with the Lannan Foundation in Santa Fe, New Mexico, the Nevada Museum of Art presents a selection of approximately forty photographs from Sambunaris’s body of work, marking the artist’s first solo exhibition at a major American museum. Hauntingly beautiful in their documentation of the declining American terrain, Sambunaris’s images celebrate the intersection of civilization, geology, and natural history, featuring trains in Texas and Wyoming, trucks in New Jersey and Wisconsin, the oil pipeline in Alaska, uranium tailings in Utah, and a unique view of Arizona’s Petrified Forest. Together, they present a sparse and vast landscape dotted by human intervention that is distinctly American. The exhibition will also include a comprehensive archival installation featuring maps, journals, and additional records of the artist’s travels.

Born in Lancaster, Pennsylvania, in 1964, Victoria Sambunaris documents, through the lens of her camera, the vast terrain of the United States and the impact that humans have had on the natural landscape. Sambunaris received a BA from Mount Vernon College in 1986 and an MFA from Yale University School of Art in 1999. Her work has been widely exhibited in museums and galleries throughout the United States; however, her exhibition at the Albright-Knox marks her first solo museum exhibition. Her work can also be seen in numerous collections throughout the United States, including those of the Lannan Foundation, Santa Fe; Museum of Fine Arts, Houston; The Museum of Modern Art, New York; the National Gallery of Art, Washington, DC; and the San Francisco Museum of Modern Art. Sambunaris has participated in the Ucross Foundation Residency Program in Wyoming (2010), as well as the Center for Land Use Interpretation’s Wendover Residence Program in Nevada (2004), and has been awarded a Lannan Foundation Fellowship (2002) and a Rema Hort Mann Foundation Grant (2000). She has held numerous teaching positions, and currently lives and works wherever her intuition takes her.

The exhibition Victoria Sambunaris: Taxonomy of a Landscape originated at the Albright-Knox Art Gallery in Buffalo, New York and was organized by Christie Mazuera Davis, Program Director, Contemporary Art and Public Programs at the Lannan Foundation, and Albright-Knox Curator for the Collection Holly E. Hughes.