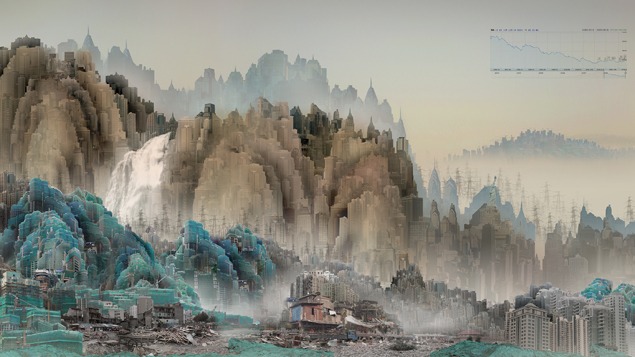 Views from China:
Yang Yongliang and the Modern Metropolis

Upon first glance, Yang Yongliang’s photographs appear as dreamlike Chinese paintings, not unlike those he studied extensively as a student of traditional art at the Chinese University of Hong Kong. However, upon closer inspection, one finds that his works are cleverly crafted from digital photographs of China’s bustling cities, and then manipulated into haunting imaginary landscapes that critique China’s rapidly changing built environment.

A young artist, born in 1980, Yongliang is a resident of Shanghai, China who depends heavily on his a camera and a laptop computer to make his art. Using only these tools—and a knowledge of traditional Chinese painting traditions—Yongliang invents urban scenes that depict skyscrapers under construction, freeway systems, electrical power plants, and bustling urban corridors. His compositions starkly reveal the impacts of technological progress that China has undergone over past decades.

Yongliang is among a generation of young artists who came of age after the Chinese Cultural Revolution, and therefore embraces a level of artistic freedom that is not common among past generations of Chinese artists.