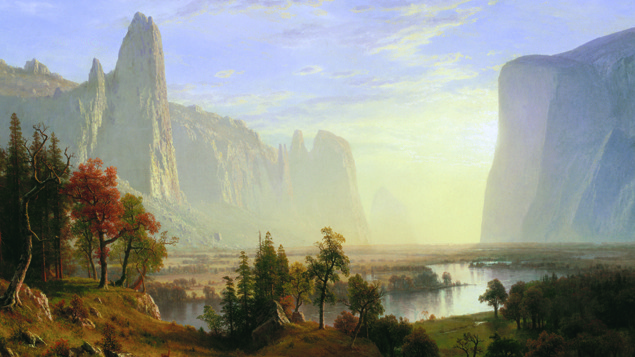 Yosemite:
Art of an American Icon

Granite cliffs, flowing streams, verdant meadows, and tourist dreams: Yosemite National Park has long been an emotional experience and place of visual drama. Portrayed as an exotic and remote locale, a national playground, a contested space, and a cultural phenomenon of national scope, Yosemite has played an important role within the national dialogue about the value, relevance, and control of the Western environment and its scenic resources.

The ongoing conversation between Yosemite, its artists, and their audience is the focus of the exhibition Yosemite: Art of an American Icon. The most comprehensive effort of its kind to date, the exhibition spans three centuries and includes paintings, baskets, and photographs. Arranged in four chronological sections, the exhibition will examine the way in which artists have shaped the park’s visual identity over time and the reflexive impact of Yosemite on their efforts.

In exploring Yosemite’s visual legacy beyond that left by an influential few, the exhibition also seeks to establish a more comprehensive and inclusive art history for one of America’s premier landscape icons. In this way, we can better understand the importance of national parks in the West as cultural destinations and the ongoing role of exceptional scenery within our collective imagination. The exhibit spans the late 19th century up to the present and includes works by Albert Bierstadt, Ansel Adams, Edward Muybridge, Chiura Obata, and Lucy Telles.